Bowser’s Castle is a recurring location in the Mario franchise, present ever since the release of Super Mario Bros. in 1985, and varied in its appearance, but the most common phenomena in these castles were fire and lava. It was common for them to feature artwork in Bowser’s image, namely statues and paintings, and spikes became a recurring decoration as well. Bowser was usually the last foe in the castle, holding either Toad or Princess Peach hostage, and the method for defeating him varied from title to title, from collecting a battle-axe behind him to tossing him into a spiked bomb.

It involves a fair amount of lava, represented mostly as red, but the four towers of the set all have orange lava pouring out of their alcoves. Bowser stands in the castle’s centre on a brown bridge that leads into a grey entryway shaped like him.

In order to defeat Bowser, Mario first has to stomp on the two switches to the left and right of his bridge, pushing the giant statue’s arms out of the way. He can also stomp on the time block and the ? block next to the switches if he so pleases. Afterwards, Mario has to step on the action tile in front of the brown bridge and turn back and forth repeatedly, which plays an intense song, triggers a gear that upsets the bridge from underneath, and slowly causes Bowser to approach Mario. (If the statue’s arms are still in the way, turning back and forth on the action tile simply does nothing.) Bowser then falls over, and Mario has to stomp on the action tile on his shell ten times to vanquish him.

To the left and right of Bowser’s statues are two two-storey towers, one carrying Boo and another one carrying Dry Bones. Boo’s tower is rotatable; Mario can gather coins as he carefully spins on the tower’s plank. Dry Bones’s tower, meanwhile, has a flipper holding him, and Mario simply has to stomp on the other side of the flipper to knock out his foe. Both towers feature black flags with a white silhouette of Bowser’s face on them.

Before the castle’s entry is a platform on which Mario can leap to avoid the lava, and behind that platform is a flipper that Mario can leap on to knock out the Lava Bubble that it is carrying.

All four of the figurines included are brick-built figures. Bowser is the largest one and requires ten stomps to defeat, making him the toughest of all the Super Mario foes. His arms and his tail are adjustable, but his legs and feet are not. His bipedal minion is Dry Bones, who likewise has adjustable arms but immobile legs and feet, but requires only one stomp to defeat. By default, he hangs out at the tower with the flipper. The other minion is Boo, a cubic figurine who is invulnerable to stomps, but Mario can collect coins by spinning the platform that he occupies. The last minion is the likewise cubic Lava Bubble, who guards the castle’s entry, and (unlike in the video games) Mario can defeat it by stomping on it once. 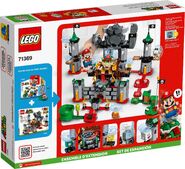 link= €99.99 +
Released
August 1, 2020 +
ShopDescription
Players will love the flipping, shaking an … Players will love the flipping, shaking and balancing challenges in this Bowser’s Castle Boss Battle Expansion Set (71369). A brilliant gift for kids to add to the LEGO® Super Mario™ Starter Course (71360), this castle toy playset features towers with rotating and shaking platforms, flippers to raise Bowser's arms and access the ? Block and Time Block, a shaking bridge, plus Bowser, Boo, Dry Bones and Lava Bubble figures.Fun-packed app<br>Intuitive Instructions PLUS, featuring cool viewing tools to make building even more fun, is available for this set on the free LEGO Super Mario app. The app also has tips on creative ways to rebuild and play and is a safe platform for fans to share ideas.Unlimited gameplay<br>Collectible LEGO Super Mario sets bring a family-favorite character into the real world and are great for group competitions or solo gameplay. The modular Starter Course and Expansion Sets, plus Power-Up Packs, allow fans to create their own levels for hours of creative fun.*Players must defeat enemies in flipping, shaking and balancing challenges when they add this action-packed Bowser’s Castle Boss Battle Expansion Set (71369) to the LEGO® Super Mario™ Starter Course.*This LEGO® Super Mario™ kids’ toy building set features Bowser, Dry Bones, Boo and Lava Bubble figures, plus castle towers with rotating and shaking platforms, a ? Block and Time Block and more for thrilling gameplay.*Kids will love battling the final boss Bowser, stomping on the flippers with LEGO® Mario™ (figure not included) to raise Bowser’s arms and get to the Time Block and ? Block, then shaking the bridge until he falls over.*An awesome birthday or holiday gift toy for kids aged 8 and up, this 1,010-piece LEGO® building set inspires youngsters to create their own unique levels to add to their Adventures with Mario Starter Course (71360).*Measuring over 9” (23cm) high, 18.5” (47cm) wide and 13.5” (34cm) deep in its basic formation, this set can be rebuilt and combined with the Starter Course and other LEGO® Super Mario™ Expansion Sets in many ways.*No batteries required – combine this Expansion Set with the LEGO® Mario™ figure in the Starter Course and let the gameplay begin.*Kids can find building instructions, digital viewing tools and a safe platform to share ideas on the free, intuitive LEGO® Super Mario™ app. For a list of compatible Android and iOS devices, visit LEGO.com/devicecheck.*Collectible LEGO® Super Mario™ toy playsets bring an iconic, family-favorite character into the real world, with loads of ways for fans to expand, rebuild and customize their own levels for competitive gameplay.*Ever since 1958, LEGO® bricks have met the highest industry standards, ensuring an easy, secure connection every time, so builders won't need a Super Star's power to fit them together and pull them apart.*LEGO® building bricks and pieces are dropped, crushed, twisted, heated and analyzed so you can be sure that this unique toy playset satisfies the highest safety and quality standards. the highest safety and quality standards.
Theme
Super Mario +
Title
Bowser's Castle Boss Battle Expansion Set +
Txt1
Bowser +
Txt2
Boo +
Txt3
Dry Bones +
Txt4
Lava Bubble +
Type
Set +
USPrice
$99.99 +
Advertisement