This set contains 21 pieces to build a Skrall. It carries a black sword with it. The last piece of the set is the sword pommel of the golden armour, to be fitted on 7116 Tahu. Most of the pieces are black.

Defeated but not destroyed, the Skrall are ready to take revenge on Mata Nui, the Glatorian warriors, and the Agori villagers they protect. Once the undisputed masters of their village of Roxtus, the remaining Skrall roam the desert in search of victims. Skrall are arrogant, vicious, brutal, fear nothing and care about even less. They are incredibly skilled fighters, both with and without weapons. What they may lack in technique they make up for with sheer bludgeoning power and strength. 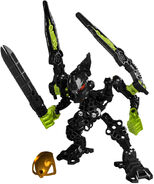