Fire Mario is the form Mario takes after powering up with a Fire Flower. This form was first introduced in Super Mario Bros. and is one of the few forms to appear in more than one game. This form's polar opposite is Ice Mario. In most games, it is required that the player be in their Super form to become their Fire form. Fire Mario is one of the original suits and is generally the most iconic alternate skin in the Super Mario franchise.

Mario and Luigi have occasionally been able to use fire without Fire Flowers. Mario possessed this ability in Super Mario RPG: Legend of the Seven Stars, in the Super Smash Bros. games, and after acquiring the Firebrand skill in Mario & Luigi: Superstar Saga and Mario & Luigi: Superstar Saga + Bowser's Minions. Luigi, on the other hand, used fire without a Fire Flower in the Super Smash Bros. series and other spin-off games, such as Mario Kart: Double Dash!!. 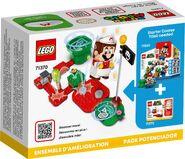 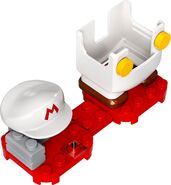 $12.99 +
Released
August 1, 2020 +
ShopDescription
Players can heat up the action in the LEGO … Players can heat up the action in the LEGO® Super Mario™ levels they’ve created with this Fire Mario Power-Up Pack (71370). It features an outfit for LEGO® Mario™ that makes him react in different ways and gives him the chance to earn Fire Attack power. This collectible accessory set makes a great gift toy for kids who own the LEGO Mario figure found in the Adventures with Mario Starter Course (71360) playset.Cool app<br/>This LEGO set includes illustrated building instructions. The free LEGO Super Mario app also has building instructions, plus fun suggestions for creative ways kids can build and play, and it offers a safe environment for kids to share ideas.Endless possibilities<br/>Perfect for fun competitions with friends or solo games, LEGO Super Mario toy playsets bring a family-favorite character into the real world. The Starter Course, Expansion Sets and Power-Up Packs offer limitless challenges and nurture problem-solving creativity.*Heat up the LEGO® Super Mario™ game action for kids with this Fire Mario Power-Up Pack (71370), featuring a buildable costume that gives LEGO® Mario™ special ability and causes different reactions.*This collectible accessory fits on the LEGO® Mario™ figure included in the Adventures with Mario Starter Course (71360) toy playset, causing unique sounds and a unique image to appear on LEGO Mario’s torso screen.*When LEGO® Mario™ (figure not included) is powered up with this suit, he can gain Fire Attack power, a new way to attack enemies and collect extra coins, adding to players’ fun in-game experience.*This 11-piece LEGO® building set makes an awesome birthday or holiday gift toy for creative kids and fans aged 6 and up to use with their Adventures with Mario Starter Course (71360).*Other LEGO® Mario™ upgrades are available to use with the Starter Course and Expansion Sets, including the Propeller Mario Power-Up Pack (71371), Cat Mario Power-Up Pack (71372) and Builder Mario Power-Up Pack (71373).*No batteries needed for this creative building toy – simply dress the LEGO® Mario™ figure from the Starter Course set with the outfit. The pack comes with clear instructions so kids can build independently.*The free LEGO® Super Mario™ app has building instructions, inspiration for fun, creative ways to play and more to delight kids. For a list of compatible Android and iOS devices, visit LEGO.com/devicecheck.*Collectible LEGO® Super Mario™ toy building sets bring an iconic character into the real world. They allow fans to expand and rebuild to create unlimited challenges to attempt to master solo or with friends and family.*Builders won’t need a Super Star’s power to connect or pull apart LEGO® bricks! Ever since 1958, the bricks have met the highest industry standards to ensure that they fit together perfectly and with ease.*LEGO® building bricks and pieces are rigorously tested and analyzed to ensure that every LEGO set meets the highest global safety and quality standards.ghest global safety and quality standards.
Theme
Super Mario +
Title
Fire Mario Power-Up Pack +
Type
Set +
USPrice
$9.99 +
Advertisement