Propeller Mario (Propellerhead Mario in the original Prima Games guide[1]) is a power-up in New Super Mario Bros. Wii. Mario gets this form after using a Propeller Mushroom. Its power is to propel up.

When Mario uses a propeller mushroom, he gains a helmet with a propeller on top with the "M" emblem, a yellow propeller blade, and a red flight suit. Mario gains blue shoes in this suit. 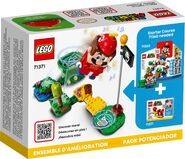 $12.99 +
Released
August 1, 2020 +
ShopDescription
Players can add a new dimension to their L … Players can add a new dimension to their LEGO® Super Mario™ games with this Propeller Mario Power-Up Pack (71371). This accessory pack features an interactive outfit with propeller cap for LEGO® Mario™ (figure not included) – propeller sounds are triggered when the player makes LEGO Mario ‘fly’ to try and win coins. This building set is a great gift toy for kids who own the Adventures with Mario Starter Course (71360), which includes the LEGO Mario figure.Build and play<br>Building instructions can be found in the box and on the free LEGO Super Mario app. The app also has suggestions for creative ways kids can build and play, and offers a safe platform for kids to share their creations with other LEGO Mario fans.LEGO Mario unlimited!<br>Great for group competitions or solo games, collectible LEGO Super Mario toy playsets bring a family-favorite character into the real world. The Starter Course building toy and Expansion Sets, plus Power-Up Packs, allow players to create their own unique levels.*Launch kids’ LEGO® Super Mario™ gameplay to a higher level with this Propeller Mario Power-Up Pack (71371), featuring a buildable costume that gives LEGO® Mario™ (figure not included) extra coin-collecting ability.*This outfit fits on the LEGO® Mario™ figure in the Adventures with Mario Starter Course (71360) toy playset. When LEGO Mario wears this buildable toy accessory and is lifted up, listen for the sound of propellers.*When Propeller Mario is launched into the air, players can earn extra digital coins to boost their score. Children will love making him swoop around as they turn the living room into a real-life LEGO® Mario™ level.*This 13-piece LEGO® building set makes a fun birthday or holiday gift toy for creative kids and fans aged 6 and up who can customize their Adventures with Mario Starter Course (71360) and Expansion Sets in unique ways.*Other cool LEGO® Mario™ upgrades are available to use with the Starter Course and Expansion Sets, including the Fire Mario Power-Up Pack (71370), Cat Mario Power-Up Pack (71372) and Builder Mario Power-Up Pack (71373).*No batteries required for this LEGO® set – add the outfit to the LEGO® Mario™ figure in the Starter Course to activate. The pack comes with illustrated instructions so children can build independently.*The free LEGO® Super Mario™ app has viewing tools to aid building, inspiration for creative ways to play and is a safe forum to share ideas. For a list of compatible Android and iOS devices, visit LEGO.com/devicecheck.*Collectible LEGO® Super Mario™ toy playsets bring an iconic character into the real world. They allow fans to expand and rebuild to create unlimited levels to master on their own or to use when competing with friends.*Builders will not need a Super Star’s power to connect or pull apart LEGO® bricks! Ever since 1958, the bricks have been manufactured to meet the highest industry standards, ensuring consistency and compatibility.*LEGO® building bricks and pieces are tested in almost every way imaginable to ensure that every LEGO set meets the highest global safety and quality standards.ghest global safety and quality standards.
Theme
Super Mario +
Title
Propeller Mario Power-Up Pack +
Type
Set +
USPrice
$9.99 +
Advertisement