Cat Mario is a form of Mario introduced in Super Mario 3D World which he can transform into by using a Super Bell. This suit is not limited to Mario, and can also be used by Luigi, Toad, Princess Peach, Rosalina, Toadette in Super Mario Maker 2, and Bowser. Mario's suit is yellow with some faint orange stripes in a few places.

Cat Mario makes its debut in the Wii U game Super Mario 3D World, serving as the main form of the game, much like Tanooki Mario was in Super Mario 3D Land, and is gained upon collecting a Super Bell. In this form, Mario can briefly climb up or cling to both walls and the Goal Pole. Mario also has the ability to claw dive on enemies from midair to slam into them, similar to a dive attack. He can also claw swipe enemies in front of him (which can spin Cat Wheels, similar to Tanooki Mario tail-whipping Tail Wheels in Super Mario 3D Land), as well as slide into them; however, he cannot defeat Bullet Bills or Banzai Bills, which simply causes them to change direction. Cat Mario runs at a crouching height, and he also breaks into a sprint significantly sooner than in any other form. If any character touches the Goal Pole in Cat form in a level that uses the regular level victory music, that character says "meow" while doing the victory pose. 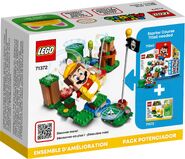 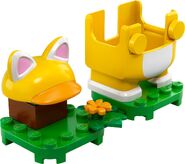 $12.99 +
Released
August 1, 2020 +
ShopDescription
Kids add feline ability to their LEGO® Sup … Kids add feline ability to their LEGO® Super Mario™ gameplay with this Cat Mario Power-Up Pack (71372). It features an interactive outfit for LEGO® Mario™ (figure not included) to wear that causes him to make purring sounds and meow and gives him the power to walk up walls and win digital coins. This unique toy playset makes a great gift for kids who own the Adventures with Mario Starter Course (71360), which includes the LEGO Mario figure.Build and play<br>Building instructions for this LEGO set can be found in the box and on the free LEGO Super Mario app. The app is a safe environment for kids to share their creations and includes inspiration for creative ways to build and play, plus other fun stuff.Competitive fun<br>Collectible LEGO Super Mario toy playsets bring a family-favorite character into the real world and are great for competitions with friends or as solo games. The Starter Course, Expansion Sets and Power-Up Packs allow fans to create their own levels for unlimited creative fun.*Give kids cat-like qualities in their LEGO® Super Mario™ games with this Cat Mario Power-Up Pack (71372), featuring a buildable, interactive outfit for LEGO® Mario™ (figure not included) to wear.*This brick-built accessory fits on the LEGO® Mario™ figure that is included in the Adventures with Mario Starter Course (71360) toy playset, causing unique sounds and a unique image to appear on Mario’s torso screen.*The LEGO® Mario™ figure meows and purrs when he wears the cat costume. He also gains the special ability to walk up vertical obstacles and collect digital coins to boost the player’s score.*This collectible, 11-piece LEGO® building toy makes a top birthday or holiday gift for kids and fans aged 6 and up, adding extra interactive fun to their Adventures with Mario Starter Course (71360) and Expansion Sets.*Other LEGO® Mario™ upgrades are available to use with the Starter Course and Expansion Sets, including the Fire Mario Power-Up Pack (71370), Propeller Power-Up Pack (71371) and Builder Mario Power-Up Pack (71373).*No batteries required for this creative building toy – just add the outfit to the LEGO® Mario™ figure in the Starter Course set to activate. The pack includes illustrated instructions to help kids build independently.*The free LEGO® Super Mario™ app features building instructions and inspiration for creative ways to play and is a safe forum to share ideas. For a list of compatible Android and iOS devices, visit LEGO.com/devicecheck.*LEGO® Super Mario™ toy building sets bring an iconic character into the real world. They allow fans to expand and rebuild to create unlimited challenges to attempt to master solo or with friends and family.*No need for a Super Star’s power to connect or pull apart LEGO® bricks! They meet the highest industry standards to ensure a perfect, easy connection every time and consistently robust builds.*LEGO® building bricks and pieces are dropped, crushed, twisted, heated and rigorously analysed so you can be assured that every LEGO set meets the highest safety standards.GO set meets the highest safety standards.
Theme
Super Mario +
Title
Cat Mario Power-Up Pack +
Type
Set +
USPrice
$9.99 +
Advertisement