Super Mario
71377 King Boo and the Haunted Yard Expansion Set is a Super Mario set that was released in August 1, 2020.

King Boo is the leader of the Boos and ghosts, ruler of the Paranormal Dimension, the main antagonist of the Luigi's Mansion series, and the arch-nemesis of Luigi. He is also an ally of Bowser, who has aided him in his various schemes. He is more than capable of devising and enacting villainous plans by himself, including his capture and imprisonment of Mario. Although not the biggest Boo, King Boo has abilities that far surpass that of the average ghost; he wields a number of impressive magical abilities, including the ability to materialize objects. King Boo's magical power is directly proportional to the number of Boos in his vicinity.

The terrain is the earthiest of the Super Mario sets; the bricks in general make far more use of subdued tones like grey and dark orange, in contrast to the bright primary colours common to the rest of the theme. This set also features a good deal of architecture compared when to the cheaper releases in the theme, sporting a black gate secured between two little stony pillars, and two grey and brown twin towers topped with small black spires. These vacant towers connect to the dark orange nodes by the A-frame connector, one of which holds a tree that Mario can knock over to scan its action tile for five coins. Another node simply holds a couple black weeds, but a larger one has a spiderweb that Mario can overturn by stomping on a black TECHNIC piece, revealing the web’s action tile which he can also scan for five coins. Both action tiles can only be scanned once per round.

The main structure contains some gearing for the TECHNIC bars attached to the house’s left and right sides. The bars support vertical TECHNIC beams that hold up two Swoops on each side. Scanning the action tiles on their backs repeatedly results in a coin bonus with a multiplier effect. The set’s namesake, King Boo, is a large white cube that stems from the structure by means of a couple of toothed bars that are next to a worm gear. A Star Block rests safely underneath King Boo. To dislodge him, Mario has to stomp on the Swoops’ backs. This causes the structure’s machinery to steadily push out King Boo until launching him. After this, Mario can either overlook the Star Block and defeat King Boo with a baker’s half dozen of scans, providing a dozen coins, or scan the Star Block first and defeat him with one scan, providing two dozen coins. The difficulty can be adjusted by the red TECHNIC pin at the back of the structure: pushing it in one direction lets the machinery work faster, whereas pushing it in the other direction delays the machinery but can provide more coins for Mario. 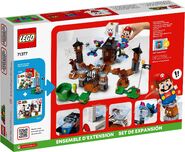