"Why should I listen to you when it'll be so much quicker to throw you into the Tahtorak pens?"
―Nektann (Piraka) to Axonn and Brutaka

7137 Piraka contains 15 pieces to build the Skakdi warrior known as Nektann. He wields a curved, silver scythe. The last part of the set is a part of the golden armour, the right arm armour.

Warlord Nektann of the Skakdi race has allied with Makuta, and now leads his people in a fierce attack on this new world. The Skakdi armies, originally from the island of Zakaz, traveled to one of the Matoran universe’s southern islands, where they battled a small army of Rahkshi. While the Rahkshi held the upper hand at first, the Skakdi managed to decimate their opponents’ ranks. Nektann later decided to serve Makuta, and brought his small army to Bara Magna’s surface where they fought alongside Rahkshi and rogue Skrall. 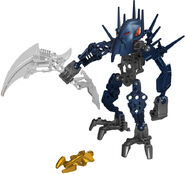 Retrieved from "https://brickipedia.fandom.com/wiki/7137_Piraka?oldid=1637995"
Community content is available under CC-BY-SA unless otherwise noted.