Brickipedia
Register
Don't have an account?
Sign In
Advertisement
in: Class 1 articles, Sets listed for ages 6, 2021 sets,
and 3 more
English

71384 Penguin Mario Power-Up Pack is a Super Mario set that was released on January 1, 2021. It is based on the penguin suit power-up that premiered in New Super Mario Bros. Wii in 2009.

Penguin Mario is a power-up that debuted in New Super Mario Bros. Wii. In general, the power-up enables the player to move faster by sliding on their belly, shoot ice balls, and gives the player better swimming control.

Mario becomes Penguin Mario after gathering a Penguin Suit. After Mario has become this form, he can throw Ice Balls at enemies and freeze them. Mario can then use the frozen enemies as platforms or pick them up and throw them against the wall or other enemies. He also gains a good traction on ice, stopping him from slipping like normal Mario. While in this form, Mario can slide on ice with great speed, defeating some enemies and destroying Brick Blocks, allowing him to find secret areas. If he gets a running start, Mario can also slide a considerable distance on the surface of water, and can jump up from the water in order to obtain certain Star Coins or blocks. Also, while in this form, Mario can be controlled underwater using only the direction pad. 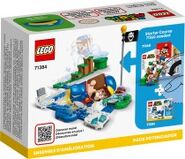