This set contains 18 pieces to build a yellow Rahkshi of heat vision. It includes a new "spine" and a redesigned Rahkshi head part, which is connected to the back piece with a small rubber tube. It carries a staff. The last piece is the golden shield of the golden armour, to be fitted on 7116 Tahu.

Armed with the power of heat vision, the yellow-armored Rahkshi are a devastating and perhaps unstoppable foe. Hordes of Rahkshi fight for Makuta on the surface of Bara Magna, swarming over Glatorian warriors and Agori villagers. Rahkshi are suits of armour created when a Kraata “slug” is immersed in energized protodermis. They have been Makuta’s servants for tens of thousands of years. They are fast and tough, but not indestructible. Rahkshi have different powers based on their armour colour. 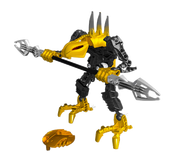 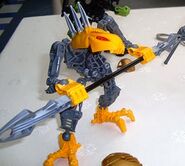