Brickipedia
Register
Don't have an account?
Sign In
Advertisement
in: Class 3 articles, Sets listed for ages 6+, 2021 sets,
and 3 more
English

Bee Mario is a form that Mario and Luigi take after obtaining a Bee Mushroom in Super Mario Galaxy and Super Mario Galaxy 2. When Mario takes this form, his hat becomes a brown helmet with yellow antennae, his overalls turn yellow with brown stripes, his shoes turn reddish-brown (Luigi's color scheme is reversed from this.), and he grows a stinger (though it cannot damage enemies and is simply for decoration) and small wings, which allow Mario to take flight in a similar manner to a bee for a short time. When Mario flies, his fly gauge will decrease unless he refills it by collecting coins, clinging to honeycombs, or landing. The fastest way to refill the gauge while flying is to stomp on enemies. Mario is also able to climb honeycombs and walk on flower petals and clouds. Mario will lose this form by taking damage or touching water, though it is possible for him to go underwater due to a glitch in the Sea Slide Galaxy.

Bee Mario is unable to hit ? Blocks, use advanced jump moves, and pick up shells. Also, his Spin radius will become smaller and honey with a yellow trail will replace the regular blue cosmic-looking spin trail. 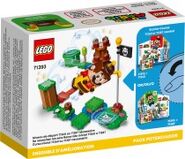 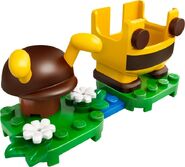