"I don't need your money. I work for the thrill."
―XPlode

XPlode's spikes on his weapon is the same part as Krika's back legs. He also wears Skrall body armour. His meteor blaster is made out of the same parts used previously in the Thornax Launcher from BIONICLE. His colours are red, yellow, and black.

XPlode was one of the evil Von Nebula's most feared servants. He did not work regulary for Von Nebula, since he was a powerful and rich criminal known in the underworld. XPlode carried explosive spikes that could be launched, which were one of his favorite weapons. He had a short temper and was armed with a meteor blaster. His favourite quote was "I don't need your money. I work for the thrill.". He was captured along with the rest of Von Nebula's Gang. He spent sometime in prison. Then He later escaped during the mass breakout, but was later recaptured.

Notice the black armor on the torso instead of the final maroon. 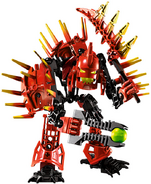 $19.99 +
Released
July 2010 +
ShopDescription
Turn up the heat with this hot tempered … Turn up the heat with this hot tempered henchman!</br></br>Proximity alert! XPlode has been spotted at an explosives plant and is about to cause major mayhem! Von Nebula’s short-fused servant, XPlode is covered in blazing spikes that he blasts off at anyone and anything! Don’t even try reasoning with this hot-headed renegade!</br></br>* Von Nebula’s most feared henchman</br>* Short-fused, impatient and always questioning authority, XPlode is one fiery villain!</br>* Weapons include blazing spiked armor and Meteor Blaster</br>* Stands over 7” (17cm) talleteor Blaster
Theme
Hero Factory +
Title
XPlode +
Type
Set +
USPrice
$12.99 +
Advertisement