"You think I'm dumb. Everybody think's I'm dumb…until I get my hands on them."
―Thunder

Thunder has two different arms. His left arm consists of the same armor as the Toa Inika leg armor and a part of 8989 Mata Nui's shield. His right arm appears to be the same part as the Toa Inika arm armor but at the front of Thunder's arm. His legs are composed of Ben 10 and BIONICLE Vahki pieces. His feet are the same piece as the foot pieces from the BIONICLE Stars subtheme. Thunder has a Meteor Blaster (a green ball) as his left weapon.

Thunder was a servant of the evil Von Nebula. He was armed with a crush claw and a meteor blaster, and was Von Nebula's strongest servant. He was eventually captured by the heroes after the defeat of Von Nebula.

When the breakout occured Thunder escaped, he is presumably still on the loose and evading capture by the Hero Factory, he is likely to never be recaptured. 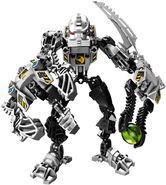 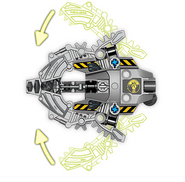