The 7159 Podracer Bucket was a Episode I: The Phantom Menace set released in 2000. It set came in a bucket as opposed to the normal LEGO box. This set includes 291 pieces of miniature models of the podracers belonging to Neva Kee, Aldar Beedo, Clegg Holdfast, and Anakin Skywalker. It also includes three minifigures, Anakin Skywalker, Jar Jar Binks and a Generic Alien/Aldar Beedo.

The set contains four podracers, and an observation stand.

The first of the podracers has two large engines, coloured blue with yellow stripes, with two red jets projecting from the rear of each engine. They are connected to the cockpit by a grey wire each. The cockpit is mostly blue, but with some yellow and red elements on it.
The second podracer is also primarily blue, but, unlike he previous one, is short and squat. The cockpit is built on a white plate, and just consists of a pointed frontal area, with grey handlebars placed on top of it. Two grey booster engines are stuck on each side of it. The two engines, placed at the back, are very large, and connected directly into the rest of the podracer. They are primarily blue, striped with grey, and with some white underpinnings.


The third podracer, Anakin's, consists of two long engines, coloured dark grey and blue, with yellow spikes at the ends. Each engine is connected to the main body of the racer by a light grey tube piece. The body of the racer is skinny, and is coloured blue with white accents. Thee is a depression in it for a pilot to sit, and a blue logo printed on it's front.
The final podracer, is relatively short, and follows the basic design most of the use. Two long grey engines are connected to each other by a transparent neon orange energy beam, and the two engines themselves connect to the body of the racer via light grey tubes. The racer's body has no obvious cockpit or place for a minifigure to be set, and a large white tailfin.

The final structure in the set is a tower/archway for observing the racers. The structure is made out of two tan towers, each of which connects into a single large beam, connecting them together. Atop each tower is a large sunshade. A peculiar rotating object is set equidistant on the beam between the two towers, and has both blue and red lights set on it.

Neva Kee was a podracer who took part in the Boonta Eve Classic. Although LEGO never made a minifigure of him, they did make his podracer. This is similar to what they did with podracer Clegg Holdfast, because both of their racers appeared in this set.

Clegg Holdfast was one of the people who took part in the Boonta Eve Classic race. Although LEGO never made a minifigure of him, they did release his podracer. His podracer appeared in this set.

Raced in the Boonta Eve Classic. 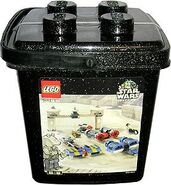 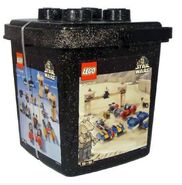 The art on the bucket 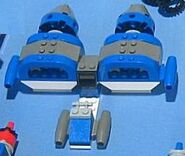