"I just love cutting Heroes down to size."
―Rotor

Rotor is orange and black, and has a rotor on the top of his body, which is the same as 8734 Brutaka's weapons. He is a titan. His box is similar in size to Von Nebula's and he can fly with his propeller. His right arm weapon is an Av-Matoran jet pack, which is able to shoot biohazard gas. He has a Meteor Blaster on his left hand with a lime green zamor sphere. The pistons on his legs are orange instead of silver. He was featured in the first Hero Factory comic, along with his fellow villain, XPlode. Rotor, in the 2010 Hero Factory animated series, uses the jaw-like feature on his mask as protection. When he talks, it opens up to reveal a static pattern in the shape of a lightning bolt sideways. When he talks, the green zig-zag blips and stutters. 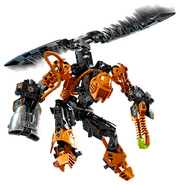 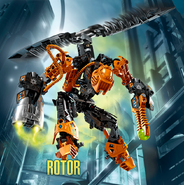 The rotor in motion. 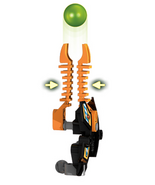 $39.99 +
Released
July 2010 +
ShopDescription
Attack from every direction with Rotor! … Attack from every direction with Rotor!</br></br>Incoming object identified as villain Rotor, one of Von Nebula’s most dangerous minions. Capable of incredible speeds and mobility with his helicopter jet pack, Rotor uses his lethal biohazard gas to attack from every direction! Get too close and the whir of his rotors might be the last sound you’ll ever hear!</br></br>* Armed with biohazard gas shooter and meteor blaster!</br>* Helicopter jet pack spans over 10” (25cm)!</br>* Over 8” (20 cm) tall!s over 10” (25cm)!
Theme
Hero Factory +
Title
Rotor +
Type
Set +
USPrice
$19.99 +
Advertisement