"There's nothing like the feeling of putting some lowlife away for good. That's what the Hero Factory does. We take out the galaxy's trash.""
―Preston Stormer [1]
"Okay, rookies, playtime's over."
―Preston Stomer

The set 7164 Preston Stormer is a set of the Hero Factory theme released on July 2010, including a white Hero with a blue head and core.

Stormer has a blue head, a blue hero core, white armour and bright blue limbs, along with a multifunctional ice weapon. His weapon sports a rotating saw, several connected ice spikes, a harpoon launcher, and another spiky tool at his elbow. When the weapon is detached, the arm becomes a Toa hand piece. Spikes project from the shoulders of his body armour, which is not in sync on both sides. The back of the canister shows him battling Von Nebula.

Stormer's the Hero Factory Alpha Team leader, having completed more missions than any other hero. He is dedicated and loyal, but secretly shaken by a previous mission when a fellow Hero turned against the Hero Factory, leaving Stormer to complete the mission on his own. Brave and tough, yet proud and competitive, he is armed with a built-in multi-functional ice weapon, featuring an ice saw, ice shooter, and harpoon to stop anyone in their tracks. One of his quotes is "Okay, rookies, playtime's over." 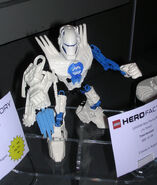 Stormer at a toy fair.

A closeup of Stormer's right arm.