"Our core makes us who we are."
―Natalie Breez

7165 Natalie Breez is a Hero Factory set released in 2010. It includes a small lime-green Hero.

Natalie Breez, the only female Hero released, has sports green armour, a red core and orange eyes, and black limbs in her 1.0 form. The set includes in total nineteen pieces, which consist of limb bricks, green armour, a head and a core, and two silver and green energised boomerangs, her weapons. The back of the canister that the set comes in shows an image of her battling Thunder on the back.

A Hero Factory rookie training alongside Furno and Surge, Breez is agile, a natural diplomat and always ready to give a mission everything she’s got. Armed with energized dual boomerangs and harpoon for climbing, she’s always ready to tackle any mission. Breez also took a part in the missions when Fire Lord and Black Phantom caused trouble. Her core allows her to talk to thousands of different types of animals. When Breez showed maturity during the battles with Von Nebula, Stormer promoted her to a full-fledged Hero. 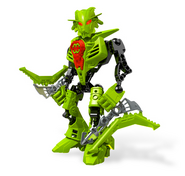 Natalie with her weapons.

Natalie on display at the New York Toy Fair.

x12px $17.99 +
Released
July 2010 +
ShopDescription
Harness the power of the wind with Bree … Harness the power of the wind with Breez!</br></br>Alpha team’s newest recruit, Breez is a Furno’s tough trainee. Her energized dual boomerang and unique air powers help this natural diplomat to restore order to the chaos caused by Von Nebula’s clan.</br></br>* Rookie of the Alpha team!</br>* Use the energized dual boomerangs and harpoon for climbing!</br>* Equipped with removable hero core, high-tech air armor and a helmet with camera and communications headset!</br>* Over 6” (15cm) tall!unications headset!
Theme
Hero Factory +
Title
Natalie Breez +
Type
Set +
USPrice
$7.99 +
Advertisement