Surge, a rookie recently constructed in the Assembly Tower, uses two lightning shooters, identical pieces with silver hilts and translucent yellow lightning bolt blades. He has yellow-green eyes, a yellow-green hero core, blue armour and silver limbs. Like Furno and Breez, but unlike the three Alpha Team members, Surge has two arm pieces. His body armour is the same shape as Furno's and Breez's. The back of the canister shows him battling Corroder.

The youngest rookie on the Hero Factory team, Surge is a little clumsy, yet highly competitive. He is hot-tempered, and secretly believes that one day he will turn evil, courtesy of a flaw that he believes was built with him. Surge tends to have problems landing his hero pod, but his skill in manipulating his electrical shield, armour and lightning weapon makes up for it. His quote is "Yeehaa!". He fought the minions of Von Nebula, and later was promoted to a full-fledged Hero. On the back of the canister, a picture depicts Surge battling Corroder. 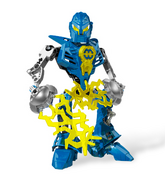 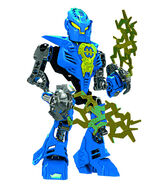 Surge
Add a photo to this gallery

Retrieved from "https://brickipedia.fandom.com/wiki/7169_Mark_Surge?oldid=1986943"
Community content is available under CC-BY-SA unless otherwise noted.