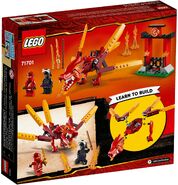 £17.99 +
Released
2020 +
ShopDescription
LEGO® NINJAGO® fans can recreate famous sc … LEGO® NINJAGO® fans can recreate famous scenes from season 1 of the TV series with this upgraded legacy red dragon toy and 2 minifigures. Kai’s Fire Dragon (71701) must stop Lord Garmadon snatching the Sword of Fire from the mini fire temple. Kids are sure to be entertained for hours as they escape into this fantasy world. The new way to build toys for kids LEGO fans now have a new and interactive way to build this dragon toy figure: the digital Instructions PLUS via the free LEGO Life app on smartphones and tablets. Zoom, rotate and view this ninja dragon as it comes to life on a screen and in front of you. Welcome to 4+! LEGO NINJAGO® 4+ toys offer preschool kids a gateway to an action-packed world where they can let their imaginations run wild as they learn to build their favourite characters, vehicles and buildings. With Starter Brick bases to make the process simpler, these sets are specially designed so first-time builders can experience the pride of constructing all on their own.</br></br>*LEGO® NINJAGO® Legacy playset featuring Kai and his Fire Dragon from season 1 of the TV series for epic battles against Lord Garmadon. This cool toy for kids will help them learn to build with confidence.</br>*This ninja toy has a Starter Brick base to help youngsters learn to build and create role-play stories with NINJAGO® Kai, his Fire Dragon, Lord Garmadon, a mini fire temple with the Sword of Fire, and 2 fire elements.</br>*This Red Dragon toy is highly posable, and can move its legs, wings, tail, head and mouth as it battles alongside Kai against Lord Garmadon. Kids can devise stories as they seek to protect the Sword of Fire.</br>*This 81-piece dragon toy provides a fun building experience for preschoolers and youngsters aged 4+ and makes a great birthday gift for kids, Xmas present, or LEGO® gift for any occasion.</br>*New for January 2020, this is an update on the LEGO® NINJAGO® dragon toy from season 1 of the TV series. The ninja dragon measures over 2” (6cm) high, 2” (6cm) long and9” (23cm) wide – the perfect size to play with anywhere.</br>*No batteries are needed for this LEGO® NINJAGO® dragon – it’s can be played with right out of the box. The dragon toy figure is powered by kids’ imaginations, so the quest to protect the Sword of Fire never has to stop.</br>*The perfect LEGO® toy to help preschoolers learn to build. A guide is included to explain the building steps and the ninja dragon can also be built using the interactive Instructions Plus guide on the free LEGO Life app!</br>*LEGO® 4+ buildable toys introduce younger children to a wide universe of their movie favorites, TV characters and everyday heroes, helping them to understand the purpose of building steps and boosting their confidence.</br>*LEGO® building bricks have met the highest industry standards since 1958. They are consistent, compatible and pull apart with ease every time. Used to create this ninja build, they would defeat even Lord Garmadon!</br>*These LEGO® bricks and pieces have been rigorously tested and meet the highest global safety and quality standards, both here on Earth and in NINJAGO® city!, both here on Earth and in NINJAGO® city!
Theme
Ninjago +
Title
Kai's Fire Dragon +
Txt1
Kai +
Txt2
Garmadon +
Type
Set +
USPrice
$19.99 +