Brickipedia
Register
Don't have an account?
Sign In
Advertisement
in: Class 3 articles, Sets listed for ages 9+, Ninjago,
and 3 more
English

71720 Fire Stone Mech is a Ninjago set that was released on August 24, 2020 under the Master of the Mountain subtheme.

In "Masters Never Quit", the Stone Mech is discovered inside the Heart of the Mountain by Cole, Wu, Vania, and the Upply. Wu notes that the mech, entirely made out of stone, is unlike any mech he has ever encountered before, and the group speculates that it may have been used to construct the temple. Plundar examines the mech but finds no means of working it, though he does discover some equipment that Cole dons for the duration of the battles with the Skull Sorcerer.

In "The Ascent", Cole hits upon the idea of attaching wheels from a mine cart to the mech's feet so that the mech can be used to push two more mine carts carrying his friends up the mine cart tracks and back to Shintaro proper. He discovers that the mech is powered by his elemental energy, and after struggling briefly to adjust to the wheeled configuration begins using it to travel up the tracks. He and his friends are attacked by the Lava Monster that has been pursuing them for some time, but after discovering the mech's sword Cole is able to best the creature. He also discovers that the mech is flight capable and saves Wu and the Upply from magma, but loses control of the mech due to it being half-covered in magma (thus approximating the appearance of the set version of the mech). Fortunately, the mech is able to reach the royal gardens of Shintaro before shutting down, apparently for good. 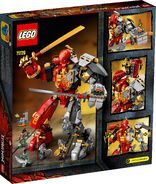 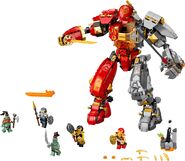