Brickipedia
Register
Don't have an account?
Sign In
Advertisement
in: Class 2 articles, Sets listed for ages 7+, Ninjago,
and 3 more
English

In "Five Thousand Fathoms Down", Pixal unveils a pair of Hydro Mechs-referred to as APS suits-aboard the Hydro Bounty, having initially intended to build one for each of the Ninja. Nya and Maya each pilot one to the Temple of Wojira, only to be knocked unconscious while attempting to use them to escape. In "The Wrath of Kalmaar", the pair are able to escape from Kalmaar's minions and return to the suits, which they use to head out into the sea. In "Long Live the King", the suits are attacked by Ripper Sharks, and Nya is able to wield her powers through the suit to combat them.

In "Escape from Merlopia", Lloyd enters an APS suit-what became of the other is unclear-in order to fight against the Maaray Guards attempting to prevent the Hydro Bounty crew from leaving Merlopia. He later uses it to catch up to the Hydro Bounty as it is departing the city. In "The Calm Before the Storm", the suit appears in the vehicle bay of the Monastery of Spinjitzu, where Pixal is working on it and various other aquatic vehicles in anticipation of an attack by Kalmaar. In "Assault on Ninjago City", Lloyd uses the suit to travel around the flooded Ninjago City and rescue civilians while also combatting Kalmaar's forces. In "Nyad", Lloyd continues to use the suit against the Merlopian invaders, but later leaves it behind as the Ninja take refuge in the Ninjago TV News building.

In "Farewell the Sea", Lloyd uses his APS suit to travel to the lighthouse and meet up with Jay and the others, where they witness the lanterns arriving as part of the memorial service for Nya. 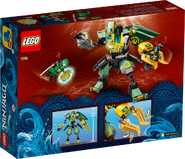 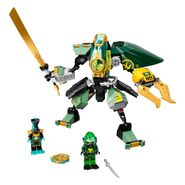