Brickipedia
Register
Don't have an account?
Sign In
Advertisement
in: Class 2 articles, Sets listed for ages 8+, Ninjago,
and 3 more
English

The sub car was a submersible combat craft created by P.I.X.A.L. for Jay's use. It is able to convert from a fast speeder to an underwater submarine thanks to propellers on its wheels. Jay used it to save tourists, and battle Wojira. However, it was damaged and stopped functioning after Wojira attempted to eat it, and it was thrown into the water.

Without any oxygen, Jay began to drown, before Cole and Benthomaar went to save him, leaving the sub car behind. 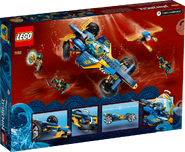 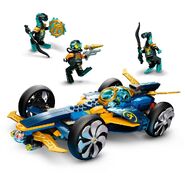 ₱2,799 +
Released
August 1, 2021 +
ShopDescription
Kids can bring to life the action-packed L … Kids can bring to life the action-packed LEGO® NINJAGO®: Seabound TV series by playing out scenes with this Ninja Sub Speeder (71752). The 2-in-1 vehicle can be transformed into either a car or submarine toy and features a detachable drone, 2 stud shooters and an opening cockpit.</br></br>Unique toys to encourage creative building</br></br>The ninja playset has 4 minifigures: Scuba Jay and Scuba Cole, both dressed in underwater gear and flippers, and 2 Maaray Guards with cool weapons. Kids can stage make-believe battles on land or under the sea to see who wins the wave amulet toy that comes with the set.</br></br>Awesome toys for ninja fans</br></br>NINJAGO buildable kits transport kids to a fun-filled fantasy world where they can team up with their ninja heroes to learn about their positive values and battle villains. They can enjoy this enriching world with an amazing collection of toys, including dragons, cars and mechs.</br></br>*LEGO® NINJAGO® Ninja Sub Speeder (71752) is a brilliant 2-in-1 vehicle that can be either a car or a submarine toy to give children endless exciting play options.</br>*Ninja toy comes with 4 minifigures: Scuba Jay and Scuba Cole, each with flippers, to take on 2 Maaray Guards in a battle for the wave amulet toy that comes with the set.</br>*Amphibious car toy with a detachable drone, an opening cockpit to place the minifigures and 2 stud shooters for imaginative kids to enjoy hours of role play.</br>*This ninja playset for ages 8 and up makes a rewarding building task for kids before they enjoy playing with a unique toy guaranteed to wow their friends.</br>*The ninja car toy measures over 2.5 in. (7 cm) high, 10.5 in. (27 cm) long and 5 in. (12 cm) wide – the perfect size for kids to play with at home or take on playdates.</br>*Look out for more NINJAGO® sets inspired by the TV series, including Lloyd’s Hydro Mech (71750), Temple of the Endless Sea (71755) and Water Dragon (71754).</br>*LEGO® NINJAGO® buildable kits helps kids step away from their screens to enjoy fun adventures and learn about the ninjas’ values of bravery and family.</br>*For more than 6 decades LEGO® bricks have been made from high-quality materials to ensure they consistently connect and pull apart – ninja skills and strength not needed!</br>*LEGO® building bricks meet stringent safety standards, giving you the peace of mind that your kids are in safe hands. of mind that your kids are in safe hands.
Theme
Ninjago +
Title
Ninja Sub Speeder +
Txt1
Scuba Cole +
Txt2
Scuba Jay +
Txt3
Maaray Guard +
Type
Set +
USPrice
$39.99 +
Advertisement