Brickipedia
Register
Don't have an account?
Sign In
Advertisement
in: Class 3 articles, Sets listed for ages 9+, Ninjago,
and 3 more
English 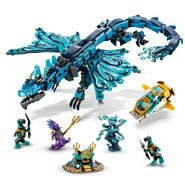 ₱4,999 +
Released
August 2, 2021 +
ShopDescription
Incredible stories from the NINJAGO®: Seab … Incredible stories from the NINJAGO®: Seabound TV series can be played out by kids with this highly detailed Water Dragon (71754) playset. The impressive dragon toy has a posable head, jaw, legs, neck, wings and a moving tail that can be used as a weapon, to help fuel hours of enriching play for youngsters.</br></br>Premium toys for kids</br></br>The dragon toy comes with 5 minifigures: NRG Nya, Scuba Zane with flippers, Prince Kalmaar and 2 dangerous Maaray Guards for kids to act out exciting clashes to winthe prized wave amulet. There is also a mini submarine with a cockpit for Scuba Zane to ride in, and a display stand for the amulet.</br></br>Awesome toys to wow friends</br></br>LEGO® NINJAGO toys offer an escape to a fun-filled world of fantasy action where imaginative kids can join forces with their ninja heroes in the never-ending battle to defend NINJAGO City. Ninja fans and their friends can choose to play with a vast collection of building toys including powerful mechs, detailed ships and superfast jets.</br></br>*LEGO® NINJAGO® Water Dragon (71754) playset featuring a highly posable dragon toy for ninja fans to recreate action from the NINJAGO: Seabound TV series for countless fun-filled hours.</br>*Includes 5 minifigures: NRG Nya, Scuba Zane, Prince Kalmaar and 2 Maaray Guards, who are all armed with cool weapons to add an extra dimension to kids’ role play.</br>*Dragon toy has highly posable wings, legs, tail, neck, a jaw that opens and closes and a moving tail that can be used as a weapon to defeat theMaaray Guards.</br>*The set also features a mini submarine toy with an opening cockpit for Scuba Zane to ride inside, plus a precious wave amulet to be displayed in a sea-bed unit.</br>*This highly detailed ninja playset for kids aged 9 and up is packed with features and minifigures and is a premium toy guaranteed to impress friends.</br>*The Water Dragon stands over 5.5 in. (14 cm) high, so kids can proudly display it in their bedroom after defeating the Maaray Guards on the play battlefield.</br>*Look out for more sets inspired by the NINJAGO®: Seabound TV series including Lloyd’s Hydro Mech (71750), Temple of the Endless Sea (71755) and Hydro Bounty (71756).</br>*LEGO® NINJAGO® has a brilliant range of creative toys for both play and display that gives little ninjas the chance to escape to an enthralling fantasy world.</br>*For more than 6 decades, LEGO® bricks have been made from high-quality materials to ensure they connect and pull apart consistently every time – ninja skills and strength not needed!</br>*LEGO® building bricks meet stringent safety standards, so kids are in safe hands.fety standards, so kids are in safe hands.
Theme
Ninjago +
Title
Water Dragon +
Txt1
NRG Nya +
Txt2
Scuba Zane +
Txt3
Prince Kalmaar +
Txt4
Maaray Guard +
Type
Set +
USPrice
$69.99 +
Advertisement