In this set, Dunkan Bulk has slight modifications, like an Av-Matoran jetpack and a new right arm, which is also used as the arm of 7170 Jimi Stringer, and an orange pipe on his head. Vapour's shoulder defense are made of the same part as Corroder's claws. His mask is identical to that of 7162 Rotor, apart from colour. Also, Vapour's weapons are Meteor Blasters with opaque spheres. Vapour's head is the same shape as the Heroes and the colour is blue.

Vapour was able to shoot corrosive vapor using his weapons which are connected to two tubes.

Battle in the city.

The two squaring off. 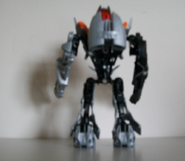 At … Dunkan Bulk and Vapour face off!</br></br>Attention Hero Dunkan Bulk: Vapour has just been spotted causing major mayhem and must be stopped. Report immediately to the Refitting room to be mission-equipped with a high-tech breathing helmet, charged jet pack and a special weapon for each arm. Only this specialized equipment, combined with your strength and experience, can withstand Vapour’s dual tube-fed cannons that shoot corrosive vapour.</br></br>* Battle Von Nebula’s henchman Vapour!</br>* Includes Dunkan Bulk and Vapour plus special weapons and accessories!</br>* Both figures over 6” (15cm) tall!ories!