Brickipedia
Register
Don't have an account?
Sign In
Advertisement
in: Class 2 articles, Sets listed for ages 6 - 12, Kingdoms,
and 3 more
English

7187 Escape from the Dragon's Prison

Escape from the Dragon's Prison

7187 Escape from the Dragon's Prison is a Kingdoms set released in 2011. The set includes a small Dragon Kingdom prison. Also included are a mounted Elite Dragon Knight with a visor on a Unicorn, a Crossbow Dragon Knight, a Sword Lion Knight, and one captured Lion Knight.

The Dragon Prison is the main part of the set. This consists of two tower connected together with a gated entranceway. Each of the tower has a mounted Dragon Knight shield. The two the towers are different from each other. The left tower is a prison while the right tower is a small treasury. On top of each of the towers is a turret enclosed on three sides by battlements. The right tower also has a catapult and the left has two flags.

The Lion Knights have a small ballista with two spears and a flick-fire missile. The cart can be pushed or pulled by a handle, and it drives on two brown wheels. 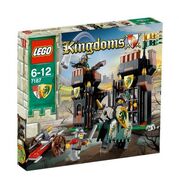 Elite dragon knight on his horse

x12px $44.99 +
Released
July 2011 +
ShopDescription
Help the king’s knight escape! <br / … Help the king’s knight escape! <br />One of the king’s knights is being held captive in the tower by the evil dragon knights! Another king’s knight is here to help and smashes through the prison gate with his ballista. Help him avoid the crashing boulders being hurled his way from the tower gate catapult! Then defeat the dragon knight on horseback to escape!*Includes 4 minifigures: 2 king’s knights and 2 dragon knights*Features fully armored horse*Smash through the prison gates with the ballista’s flick shooter!*Roll the ballista into position and fire!*Scale the prison tower!*Measures over 7” (17cm) wide and 6” (15cm) tall*Ballista measures over 2” (5cm) wide and 2” (5cm) long*Horse measures over 3” (7cm) longm) long
Theme
Castle +
Title
Escape from the Dragon's Prison +
Txt1
Lion Knight +
Txt2
Elite Dragon Knight +
Txt3
Sword Lion Knight +
Txt4
Crossbow Dragon Knight +
Type
Set +
USPrice
$19.99 +
Advertisement