Brickipedia
Register
Don't have an account?
Sign In
Advertisement
in: Class 2 articles, Sets listed for ages 6 - 12, Castle,
and 4 more
English

7188 King's Carriage Ambush is a Kingdoms set released in May 2011. The set includes a carriage and two trees outfitted with traps.

The Lion King's carriage is the main part of the set. This has many arches built all around the body. The arches are connect onto the body, where the King sits on a chair. There are axes and shields and both sides of the carriage. There is a chair for the driver at the front end. The top of the carriage can be lifted up so that you can play inside the carriage. At the back of the carriage there is a treasure chest that can be shot off. The carriage is pulled by two Unicorns.

One of the tree hideouts features slopes and arches giving the look of a tree, and an addition of a battering hammer to slam into the carriage. The other tree hideout included features the same slopes and arches look, with an addition of a web and a flick-fire flaming missile. This set hints that dragon knights are at least somewhat proficient in tree climbing, suggesting that the dragon kingdom is located in a forest. 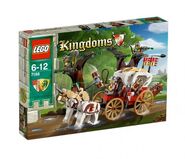 The back of the carriage

x12px $79.99 +
Released
July 2011 +
ShopDescription
The royal treasure is under attack! … The royal treasure is under attack! <br />Can the brave knight safely drive the carriage full of royal treasure through the forest where the dragon knights are waiting to ambush it? Protect the treasure as you fight side-by-side with the king and his golden sword! Watch out for the catapult hammer as it tries to slam into the carriage!*Includes 4 minifigures: king, king’s knight and 2 dragon knights*Features 2 horses, golden elements, treasure, spider’s web and spider*Weapons include golden sword, flick shooter and catapult hammer*Measures 7” (17cm) wide and 5” (12cm) tall*King’s carriage with horses measures over 8” (20cm) long and 5” (12cm) tallres over 8” (20cm) long and 5” (12cm) tall +
Theme
Castle +
Title
King's Carriage Ambush +
Txt1
King +
Txt2
Lion Knight +
Txt3
Axe Dragon Knight +
Txt4
Spear Dragon Knight +
Type
Set +
USPrice
$39.99 +
Advertisement