The set 7190 Millennium Falcon was released in 2000 as part of the LEGO Star Wars Classic line. It is the first model released of Han Solo's ship, the Millennium Falcon. Included are Han Solo, Princess Leia, Chewbacca, Luke Skywalker (Tatooine), R2-D2 and C-3PO minifigures.

The minifigures included in the set 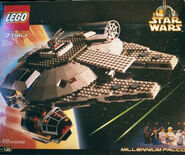 Other sets containing the Millennium Falcon