7255 General Grievous Chase was a set released in 2005 as part of the Revenge of the Sith line. It included General Grievous and Obi-Wan Kenobi minifigures, along with Grievous' wheel bike and Boga, the Varactyl Obi-Wan rides.

There are two main parts in this set, the wheel-bike and Boga. The wheel-bike has four legs, made out of a technic piece with drills connected onto them, connecting on tho the wheel. The wheel has binoculars in it. The wheel is transparent white with markings on it. The wheel also connects onto the seat where General Grievous sits. Boga is mainly dark green, with lighter green for her legs. On her feet there are claws. The middle of her is light beige. There is a seat for Obi-Wan to go on.

General Grievous was having a meeting with the Separatist Council on the arid planet of Utapau when Obi-Wan came in and spoiled it. Grievous hopped in his wheel bike and attempted to escape, with Obi-Wan following him on his large, female lizard-like pet, Boga. 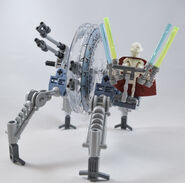