Brickipedia
Register
Don't have an account?
Sign In
Advertisement
in: Class 3 articles, Sets listed for ages 5-12, 7000 sets,
and 3 more
English

7279 Police Minifigure Collection is a City Police set released in December of 2010 in the United States, and January of 2011 elsewhere.

The ATV has enough room to sit in a minifigure and has a shaft on its front designed to act like a bumper. The printed "POLICE" tiles will make another appearance in 7553 City Advent Calendar.

The ATM features an opening and closing safe to fit inside the two included one hundred dollar bill pieces. Because of the design of the ATM it will not be level if it is tried to be connected to a baseplate's studs.

The dog has black markings on its face. These make it look like a German shepherd, a common police dog. 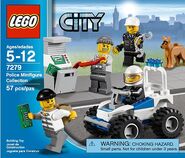