Brickipedia
Register
Don't have an account?
Sign In
Advertisement
in: Class 4 articles, Sets listed for ages 7-12, 2001 sets,
and 3 more

This set is composed of modular sections connected by TECHNIC pins. These sections can be reassembled from a bipedal mech into a small fighter. The modular system also allows combinations with other sets in the theme. 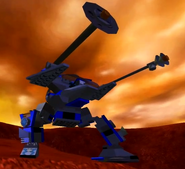 The slightly modified version of the Protector in LEGO Racers 2

The set in its flight form