Brickipedia
Register
Don't have an account?
Sign In
Advertisement
in: Class 4 articles, Sets listed for ages 7-12, Life on Mars,
and 2 more

7315 Solar Explorer is a Life on Mars set released in 2001. It is the largest Astronauts vehicle. It also acts as the Astronauts' base. The vehicle houses a small Mars rover and machinery. The Explorer also appears in the video game LEGO Racers 2 as the vehicle in which the player goes to Mars. The player takes and pilots the Explorer to Mars but, before landing, the Explorer hits an asteroid and crashes on Mars. On Mars Doc repairs the shuttle and asks the player to collect some fuel for the ship, in the form of energy crystals, as a bonus game. It appears docked in Sandy Bay and crashed on Mars.

This set is composed of modular sections connected by TECHNIC pins. These sections can be separated into a smaller shuttle, a shelter, a lander, and a rover. The modular system also allows combinations with other sets in the theme.

The shuttle docked in Sandy Bay in LEGO Racers 2

The Explorer crashed on Mars in LEGO Racers 2

The Explorer's rover in LEGO Racers 2 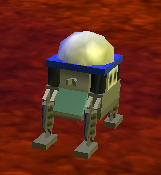 The Explorer's lander on Mars in LEGO Racers 2