Brickipedia
Register
Don't have an account?
Sign In
Advertisement
in: Class 2 articles, Sets listed for ages 6+, 2003 sets,
and 3 more

7410 Jungle River is an Orient Expedition set released in 2003. It contains a boat, Johnny Thunder, a Crocodile, a shrine, and a snake. It is a part of the storyline’s India segment.

The set includes a white boat with a large engine in the center and a box of tools in the front. At the back is an area for Johnny Thunder to stand/sit to pilot the boat. There are two animals contained in the set: a bright green crocodile and a red snake. The shrine has an idol with a skull, a hat the same shape as Achu’s, a red jewel on its chest, and two wavy blue arms. Johnny Thunder has a pistol and is wearing his Indian clothes with a green torso and tan trousers.

Johnny Thunder rides down a hostile river for treasure clues. 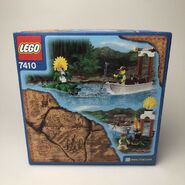 The box back with alternative builds

$7.99 +
Released
2003 +
ShopDescription
Explore the jungle river and the crocod … Explore the jungle river and the crocodile shrine!<br>Johnny Thunder is piloting his boat down the winding jungle river, in search of a clue to the location of the Golden Dragon. But watch out! If he sails too close to the shrine, he might disturb that hungry crocodile! Includes Johnny Thunder, crocodile, and adventuring gear. Thunder, crocodile, and adventuring gear. +
Theme
Adventurers +
Title
Jungle River +
Txt1
Johnny Thunder +
Type
Set +
USPrice
$7.99 +
Advertisement