Brickipedia
Register
Don't have an account?
Sign In
Advertisement
in: Class 3 articles, Sets listed for ages 6+, 2003 sets,
and 3 more

7412 Yeti's Hideout is an Adventurers set released in 2003 as part of the Orient Expedition theme. It includes a Yeti and Pippin Reed. It also includes three Johnny Thunder game cards.

The set consists of two parts: the Himalayan shrine and the ice cave beside it. When somebody pulls on the "secret drawer" in the shrine it reveals the jewel in the drawer, but it also opens the door of the ice cave. This releases the Yeti, who scares off intruders.

The comic in the instructions tells of Pippin's adventure at the hideout. It begins with her climbing up to the shrine. She notices the handle on the shrine and decides to pull on it. When she does, it awakens the Yeti. It then chases after her. She escapes by stunning the Yeti with the flash from her camera, and then she runs away with the jewel in her hands.

The back box with alternative builds 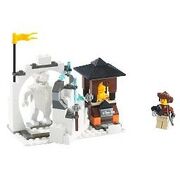 Page 1 of the comic

Page 2 of the comic

Page 3 of the comic

Page 4 of the comic