The set included several models of differing scales: A spacecraft that resembles NASA's 2001 Mars Odyssey probe, a Delta II rocket with launch tower and one of the Mars Exploration Rovers from 2003. 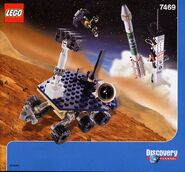 Retrieved from "https://brickipedia.fandom.com/wiki/7469_Mission_to_Mars?oldid=1200642"
Community content is available under CC-BY-SA unless otherwise noted.