Brickipedia
Register
Don't have an account?
Sign In
Advertisement
in: Class 4 articles, Sets listed for ages 8 - 14, Dino Attack,
and 2 more

The set contains a dark red and tan helicopter with many weapons to defeat the T-Rex and the Pteranodon with. The following weapons are included in this set:

The T-Rex has light up eyes and stands 10 inches (25 centimeteres) high. The Typhoon motors spin, and has dual cockpits and a working boom crane. The set includes four minifigures (Digger, Specs, Shadow and Viper), one T-Rex, and one Pteranodon.

The Typhoon in profile 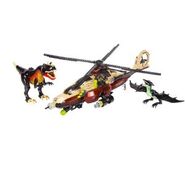