75013 Umbaran MHC (Mobile Heavy Cannon) is a Star Wars set released in 2013. It includes an Umbaran MHC and four minifigures: Ahsoka Tano, a 212th Clone Trooper, and two Umbaran Soldiers. It is a Target exclusive in the US.

The Umbaran Mobile Heavy Cannon was a highly advanced tank developed by the Umbaran Militia. It was ray shielded, and normal blaster fire and even rocket launchers could not even dent it, but it could be destroyed by torpedos. It had an electromagnetic plasma cannon designed to destroy entire platoons of enemy troops. It also had twin laser cannons that could be used to defeat smaller amounts of troops. 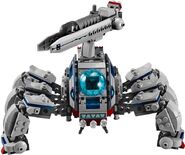 Front view of the MHC
Add a photo to this gallery