The HH-87 Starhopper was a long-ranged starfighter armed with two twin blaster cannons. It was commonly used by the Zygerrian Slave Empire. At Nal Hutta, Obi-Wan buys this ship (undercover as Rako Hardeen) and is captured by the Nikto Guard and then leads the guard to Cad Bane. 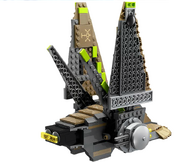