Brickipedia
Register
Don't have an account?
Sign In
Advertisement
in: Class 3 articles, Sets listed for ages 6-12, 2014 sets,
and 6 more
English

75034 Death Star Troopers is a 100 piece Star Wars set released in 2014. It includes 2 Imperial Gunners with a turbolaser turret and 2 Royal Guards with force pikes.

The main part of this set is the Death Star Turbolaser. The cannon can be elevated up and down for better range and a flick-fire missile can be launched via an axle at the reat of the cannon. 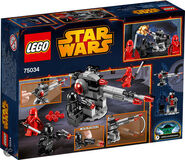