75045 Republic AV-7 Anti-Vehicle Cannon is a Star Wars set released in 2014. In some countries, this set was a store exclusive, meaning it was only available in certain stores in addition to LEGO Stores and the online LEGO Shop. This set was exclusive to Walmart in United States. It is a Big W exclusive in Australia.

The vehicle would be moved with its built in repulsorlifts until it reached a suitable firing position and then entrench itself on the ground, using four metallic feet for support.

Its artillery shells created a fairly large blast radius, able to take out both vehicles and surrounding droids in a single shot. 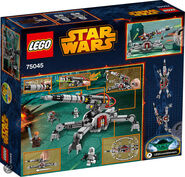