Brickipedia
Register
Don't have an account?
Sign In
Advertisement
in: Class 2 articles, Sets listed for ages 14+, 2015 sets,
and 6 more
English

75060 Slave I is a Star Wars Ultimate Collector's Series set released in January 2015. It includes Boba Fett, a Stormtrooper, a Bespin Guard, and Han Solo. This set contains 1,996 pieces.

This iteration of the Slave I measures 45 cm (17 inches) long, 20 cm (7 inches) tall, and 37 cm (14 inches) wide. It consists of 1996 pieces. The set includes redesigned minifigures of Boba Fett and Han Solo, a new Bespin Guard minifigure, and a Stormtrooper.

The Slave I was a prototype of the Firespray-31-class Patrol and Attack Craft, heavily modified by Boba Fett and his father Jango Fett. Both of the Fetts customised it with strong and advanced weapons systems. Soon after the ship was acquired by Boba, he took it to Kuat Drive Yards to have it modified again to fit his personal styles and needs. He added an ion cannon, concussion missile launcher, tractor beam projector, sensor mask, and jamming array. Boba Fett used the ship to track Han Solo to Bespin to capture him and return him to Jabba the Hutt to collect his bounty. The ship had also been active under both Hondo Ohnaka and Boba Fett during the Clone Wars. 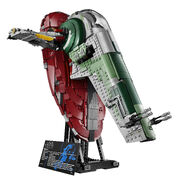 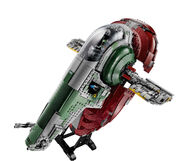 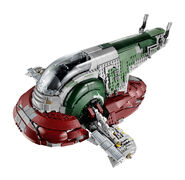 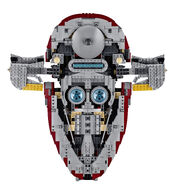 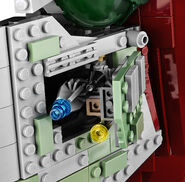 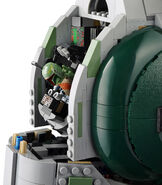 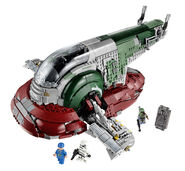 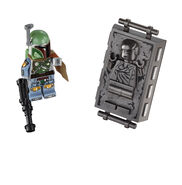