Twin Ion Engine/Ln Starfighters, or just TIE Fighters, are among the most numerous spacecraft in the Galactic Empire's fleet. Measuring 8.99m long, they consist of a ball shaped cockpit connected to two large wings. The wings are actually solar panels which power the ship. The Empire considers TIE Fighters expendable assets, as they are cheap to produce. Also, countless TIE Fighters are destroyed in battles, as they have no shields or life support. The exclusion of landing gear teaches pilots to rely completely on a higher authority while also lightening the ship to execute more precise maneuvers. Because all TIE Fighters are identical, captured ones are sometimes utilized by Rebels to infiltrate Imperial bases and the like. 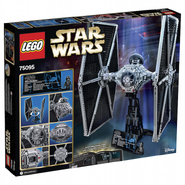 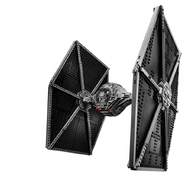 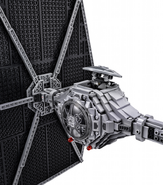 x12px 1799.00 kr +
Released
May 2, 2015 +
ShopDescription
We proudly present the Ultimate Collector … We proudly present the Ultimate Collector Series LEGO® Star Wars™ TIE Fighter™. As featured in many of the action-packed Star Wars™ battle scenes, including the decisive battle that led to the destruction of the first Death Star™, this large-scale LEGO-brick rendition of the classic Imperial starfighter has intricate detailing, as well as an opening top hatch and an exclusive TIE Fighter Pilot™ minifigure with a blaster pistol. And when you want to keep it safe from Rebel attack, mount the model on the display stand and keep yourself updated with all the key facts and figures on the included fact plaque. The Ultimate Collector Series TIE Fighter™ is the perfect addition to your Star Wars™ collection!</br></br>*Includes a TIE Fighter Pilot™ minifigure with a blaster pistol</br>*Features an opening top hatch</br>*Includes a display stand and informative fact plaque</br>*The perfect flagship model for fans of Star Wars™ and LEGO® brick building</br>*Collect one of the most iconic starships in the galaxy!</br>*TIE Fighter™ measures 18.5” (47cm) high, 12” (30.6cm) long and 12.2” (31cm) wideh, 12” (30.6cm) long and 12.2” (31cm) wide +
Theme
Star Wars +
Title
TIE Fighter +
Type
Set +
USPrice
$199.99 +
Advertisement