The build varies only very little from its 2012 predecessor, though some more significant changes were made to the cockpit: It now features the First Order's signature red/black color scheme, along with transparent red hoods. The cockpit also features two seats (one in front and one in the back) for the first time in the history of TIE fighters. The top can be opened to allow further reachability. On the top left of the cockpit, there is an antenna.

The TIE/sf space superiority fighter was a starfighter model used by the First Order, a specialized version of the TIE/fo space superiority fighter. It was a two-seater unlike the previous TIE models, and was outfitted with enhanced weapons and sensor systems as well as hyperdrives and deflector shields. The TIE/sf was reserved for members of the First Order's elite Special Forces. On the lower side of the vehicle, directly below the primary fuel tank, was a turret containing a pair of laser cannons and a mag-pulse warhead launcher. 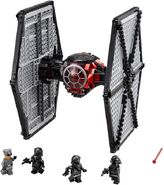