Brickipedia
Register
Don't have an account?
Sign In
Advertisement
in: Class 3 articles, Sets listed for ages 7-12, Pages that link to Legopedia (Russian),
and 6 more
English

The TX-225 GAVw "Occupier" combat assault tank, also known as the TX-225A Occupier tank, or simply the Imperial combat assault tank, was a track-propelled ground assault vehicle used by the Galactic Empire, and operated by a commander and two pilots. The tank had great maneuverability in tight quarters, such as the streets of occupied cities. Its laser cannons could devastate enemy troops, and the powerful engines could transport heavy payloads. In 0 BBY, Imperial combat assault tanks were deployed to the Holy City of Jedha during the Empire's occupation of the desert moon to transport kyber crystals. Several of Saw Gerrera's Partisans destroyed one combat assault tank and stole all of the kyber crystals that were being held on the cargo bed. 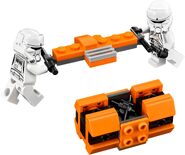