Brickipedia
Register
Don't have an account?
Sign In
Advertisement
in: Class 2 articles, Sets listed for ages 14+, Pages that link to Legopedia (Russian),
and 7 more
English

This product is 41 cm high and 42 cm wide. The set is built around a circular base made up of a triple layer of angular plates, and the lowest level is directly on top of this. One feature of this level include some barrels, many smaller cans, and a pipe. There are two wall pieces with a special sticker on each. This area spans two levels. The walls around the center each have a pair of lights and buttons on each side. The second bag is opened on the second level, after the floor for it has been built. There is a loading bay with red lights, a rack of blasters, and an entrance to the turbolift, a mechanism similar to an elevator which connects all of the set's levels. In the landing area, there is a pair of grey and blue barrels, most likely containing fuel. The exit to this area has a yellow and black "caution symbol" part. There is also a working elevator leading up to the hangar. On the wall which separates the elevator section from the rest of the floor is a pulley. A piece of string is connected to it and makes it possible to operate the elevator. This section has walls between rooms, unlike the section below it. Again, the shaft has buttons and lights adjacent to it. Instead of the floor spanning the entire circle, it only spans three-fourths, with one fourth being simply a long, angled connection, making the room taller. It has multiple entrances and exit spots, each with lights on either side. On one of them is a large cone with transparent green parts at the top which prevents the door of the trash compactor from sliding out of the set. There are many handle "grip" parts but only one ladder. There is a place on the ceiling to connect Luke Skywalker's grapple rope, allowing the builder to recreate the scene in which he and Leia Organa swing across the chasm.

The entrance and exit to the trash compactor is the turbolift shaft. The sides can both open and close. This room spans one-sixth of the circular area. The other side of the elevator is round. On the top of the shaft on that level is a set of red lights. The wall cutting the trash compactor from the shaft is placed on a flat surface so that it can slide out. To open or close the doors of this area, there is a TECHNIC axle which can make these functions possible. There are pieces of trash that are placed in this section as well. A large laser can be found next to the trash compactor and is composed of two lasers, and a TECHNIC cannon. This part can rotate and angle up and down. The laser is piloted by one minifigure, but has another seat. There is also yellow claw which is also piloted by one minifigure. The next floor has a black area over the elevator area and serves as the landing pad for the smaller TIE Fighter. There are three boxes and some arrows pointing towards another room, as well as the hole for the elevator.

The doorway to the room has an access panel similar to the one from the Star Wars video games. This doorway contains a door that slides out. The area right next to it has a set of barrels and a tube. There is also a ladder leading up to a control area with some computer screens, and a gear which opens a sliding blast door. Also occupying this area is a window to view the room. This room also contains the hyper-laser with the control panel array, which can rotate and angle. The room is connected to the next room by a doorway with lights on either side. There is also a hole which drops to the trash compactor and some small steps. A control panel operates a device here. The last fourth of this level has a part which stops minifigures from falling over the edge of the area. A set of openings into the tall room are covered by some "robot arm" parts. The room has a stairway leading up to a viewing area. This place has a chair which can rotate and a pair of transparent blue lights. The room's only doorway is covered by a large panel with a sticker which represents a long hallway. That doorway, in turn, is in its own small section.

Leading to the "hallway piece" is an angled part representing the hallway as well. The area has a gear which turns to open the hole to the trash compactor room covered by a vent. There are two control panels in the area controlling this and the gateway. There is a wall on the other side which can be raised by the turn of another gear. A control panel is right next to this piece. The area is a detention center. A laser and camera guards this area. On the top floor is the droid maintenance room. It contains a table, a chair, a desk, a rack to store Luke and Han's Stormtrooper helmets, the control mechanism for the turbolift, and a rack of equipment. Next to it is the superlaser control room. It contains two sets of computer panels. One of them rotates and raises/lowers the superlaser. On its other side is a pair of large turbolaser cannons, which both rotate. It connects to the droid maintenance room via a small hole in the wall, which is for MSE-6 Droids There is also a conference room on this floor, with seven rotating chairs and a large table. The central shaft contains the turbolift, which connects all of the station's floors.

The Death Star was a large space station with the power to destroy entire planets. The first Death Star was ordered by the Separatists to be built by the Geonosians then construction was later taken over by the newly formed Galactic Empire. After its destruction by the Rebel Alliance, the Empire built another. The purpose of such construction was to instill fear throughout the galaxy. The laser beam itself was built by Galen Erso, Jyn Erso's father who was forced by Director Orson Krennic to build the laser beam. Jyn and her team called the Rogue One was given on a mission to Scarif to take the Death Star plans and to deliver to the Rebellion. After the completion of the first Death Star, Darth Vader captured Princess Leia and questioned her regarding the secret Death Star plans he believed she had in her possession. After Princess Leia was forced to give them the location of the rebel base so her homeworld would not be destroyed (to which she gave the wrong location) Grand Moff Tarkin still executed the command to destroy the planet of Alderaan, using the superlaser. Just prior to her capture, Leia secretly had sent her two droids, C-3PO and R2-D2, in an escape pod to later bring Luke Skywalker, Han Solo, Chewbacca, and Ben Kenobi to rescue her. After escaping, Luke Skywalker and other Rebels attacked in X-Wings and Y-Wings, and destroyed the first Death Star. The Empire later created another Death Star, titled the Death Star II, which was much larger than the first. When Rebel forces launched an assault on this Death Star, it was still incomplete; however, its superlaser was operational, and destroyed several Mon Calamari Cruisers. The Second Death Star was finally destroyed by Wedge Antilles, who was piloting an X-Wing, and Lando Calrissian, who was piloting the Millennium Falcon with Nien Nunb, by flying into the space station and firing concussion missiles and proton torpedoes at the main reactor, which in turn led to its destruction.

Trash compactor room. The walls close in when one pushes a lever.

Superlaser fire control room, with viewscreen. The superlaser can be aimed and rotated from here with a dial. 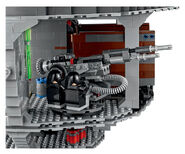 The scene in Episode IV were Obi-Wan Kenobi and Darth Vader fought.

The tractor beam power coupling. Removing one of the levers causes the blue power beam to lower.

The conference room seen in Episode IV. The table can be removed to reveal a weapon storage compartment.