75179 A-Wing Starfighter is a set released on 2017. The set is based on the Star Wars Episode VI: Return Of The Jedi.

The set comes with a buildable A-Wing Starfighter and includes minifigures like Lando Calrissian, an A-Wing Pilot, and a Rebel Ground Crew.

The A-Wing Starfighter is a starfighter used by the rebels during the time of the rebellion between the Rebel Alliance and the Galactic Empire. 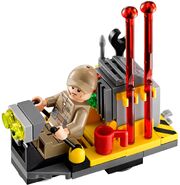 Retrieved from "https://brickipedia.fandom.com/wiki/75175_A-Wing_Starfighter?oldid=1953252"
Community content is available under CC-BY-SA unless otherwise noted.