The 75181 Y-wing Starfighter contains 1,967 pieces, which are used to make a Y-wing Starfighter. There are two minifigures included, one of which is an astromech. The set is the Y-wing from Star Wars Episode IV: A New Hope, which means it has an exposed body. The cockpit is yellow and white, and contains stickers on the sides and front of the cockpit as well as a swiveling laser cannon on top. There is a small slot for an astromech behind the cockpit. There is small retractable landing gear on the two ion jet engines, and the cockpit opens to put a minifigure in. There is a display stand, which can be lowered or raised to adjust the height. The display stand has a small placard in front that displays basic in-universe information about the ship, as well as small protruding stands on either side of the placard to place the two minifigures on.

The BTL-A4 Y-wing attack starfighter traced its lineage back to the Clone Wars and the BTL-B Y-wing starfighter used by the Galactic Republic. After the war, the starfighter was put into service by Planetary Security Forces. As the resource-strapped Rebel Alliance started to grow its resistance against the Galactic Empire, Y-wings started to be used more often, becoming the Rebel's primary starfighter. The starfighters were brought into use by defecting Planetary Security Forces pilots, liberated from Imperial storehouses, or outright bought from pirates or unscrupulous governors.

Y-wings were used since the earliest battles of the Galactic Civil War. A squadron joined in the assault on the major Imperial cloning centers on Kamino in 1 BBY. During the battle, Galen Marek rode on the outside of one piloted by the future ace Wedge Antilles for a short time.

As the BTL-S3 became the primary Y-wing variant of the Rebel forces, the A4 was still kept in many units as a supplementary craft. Despite the existence of the BTL-S3, the BTL-A4 variant of the Y-wing was favored by Red and Gold Squadrons, and served with distinction in many major battles. They were the starfighters intended to destroy the first Death Star during the Battle of Yavin. Flown by Gold Squadron, a trio of Y-wings were the first to launch a run into the trench to their target, an exhaust port leading to the main reactor, although the pilots were all shot down. Eventually, Luke Skywalker, in an X-wing, succeeded in hitting the target. After the Battle of Yavin, the starfighters were assigned to less dangerous missions.

Members of Rogue Squadron flew the BTL-A4 on strikes against Imperial targets, including the Kile II spaceport assault and the destruction of the capacitor on Sullust. After the Battle of Hoth and between 3 ABY and 4 ABY, Rogue Squadron used Y-wings on a mission to The Maw, and Antilles used one to bomb the Imperial ground forces and the hull of the crashed Imperial-class Star Destroyer Motivator that was holding the CR90 corvette Razor. Antilles also flew one during a battle at Dubrillion to destroy a superlaser threatening a Rebel fleet.

During that same time period, Rebel pilot Ace Azzameen also flew the A4 Y-wing on missions, including a mission along with the Bothans' Blue Squadron. The Bothans, sympathetic to the Rebellion and flying S3 Y-wings, participated in the capture of the Imperial freighter Suprosa during the raid to capture a supercomputer containing the plans to the second Death Star. More Y-wings were destroyed than any other Rebellion starfighter. The Y-wing was supplanted as the Rebellion, and later New Republic's, assault starfighter by the B-wing and K-wing starfighters. 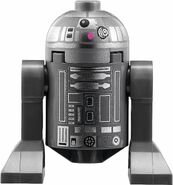 R2-BHD
Add a photo to this gallery