75182 Republic Fighter Tank is a Star Wars set that was released on June 2, 2017 under the Clone Wars subtheme. It includes four minifigures: one Clone Gunner, Jedi Aayla Secura and two Battle Droids. Each minifigure has a weapon, respectively a Blaster Rifle with added Technic piece Part 4274 to resemble a silencer, a blue lightsaber and two Blasters. This is unusual, as since 2014 the Stud Shooter has been the standard blaster weapon in Star Wars Sets. A wrench for repairs is also included.

The set came with two instruction booklets; the first one covered the tank chassis and Clone Gunner minifigure, and the second the rest of the tank and the Jedi Aayla Secura and the two Battle Droids. The tank features four small wheels hidden on the underside so as to give the effect of the tank "hovering". A hatch on top allows access to the pilot controls, represented by a small printed brick. A storage compartment for additional ammo for the Stud Shooters is located at the back of the vehicle. The Stud Shooters and large laser cannons on both sides can be rotated slightly over 180 degrees, independently of each other. Two small antennas protrude at the back.

Overall, this version is smaller and less detailed than the original 7679 Republic Fighter Tank, but has more minifigures. The color scheme is largely the same. Six stickers provide additional detail.

The Republic Interceptor TX-130 Saber-class fighter tank, otherwise known as the IFT-X or Republic fighter tank, was a maneuverable, fast-attack tank used by the Jedi Order and their clone forces during the Clone Wars. The TX-130S was sometimes referred to as the "Jedi starfighter of the ground." During the Clone Wars, the versatile fighter tank saw action on planets such as Geonosis, Rhen Var, Raxus Prime, Thule, and Saleucami. Many notable Jedi piloted fighter tanks during the Clone Wars, including Mace Windu, Obi-Wan Kenobi, Anakin Skywalker, Luminara Unduli, and Ki-Adi-Mundi who used the Force and superior skills to get the best out of these maneuverable craft. In the hands of these Jedi, these tanks proved a match for many Separatist armored vehicles. The tank was phased out of service shortly after the proclamation of the Galactic Empire, and was replaced by stronger variants, such as the TX-130T fighter tank and the 2-M Saber-class repulsor tank. However, production continued in secret, with several hundred models being sold to the Rebel Alliance. 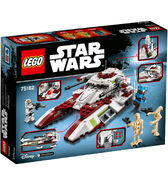 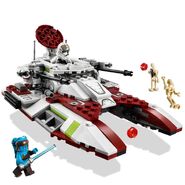