For three years (2017 - 2020) it was the largest LEGO set ever produced in piece count until it was surpassed by the 10276 Colosseum, and has the same dimensions as the 10179 Ultimate Collector's Millennium Falcon, measuring 33" (84 cm) long by 22" (56 cm) wide and 8.3" (21 cm) tall. However, it has over 2,000 additional pieces due to a more intricately detailed design. The set manages to aesthetically balance exposed studs and tiles, and has a more accurate and clean shape. It also includes many more detailing colours such as dark tan and olive green. The designers said that they also made sure to include curved pieces where necessary, overcoming the blocky look of the previous UCS model. This set also includes two small interior spaces inside the ship, which can be exposed by removing small sections of the exterior plating. The set also introduced a new, more accurate cone piece for the cockpit, which is printed and currently exclusive to the set. It also contains two exclusive minifigures, new variants of Han Solo and Princess Leia. It is also the first set to include the newly introduced Porgs. 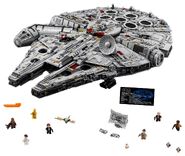 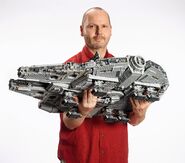 The ship in the hands of the designer

Other sets containing the Millennium Falcon.