In order to deliver the Death Star's plans to Organa on Alderaan, Luke Skywalker and Obi Wan Kenobi then searched in the spaceport town of Mos Eisley for a pilot who would be willing to transport them to Alderaan. Upon entering Mos Eisley, Skywalker, Kenobi and the droids were stopped by Imperial stormtroopers, but Kenobi used a Jedi mind trick so the troopers would let them pass. Skywalker and Kenobi headed into a cantina to look for a pilot to transport them to Alderaan. Kenobi managed to strike a deal with Han Solo, a smuggler, and his Wookiee first mate, Chewbacca to fly them to Alderaan for 17,000 credits: 2,000 in advance and 15,000 on arrival. The group met at Docking Bay 94, where they boarded the Millennium Falcon and fought off a squadron of stormtroopers, and escaped an Imperial blockade by jumping into hyperspace.

Upon arriving at the Alderaan's coordinates, they discovered that there was nothing to be found but an asteroid field; the planet itself had been destroyed by the Death Star's superlaser. While trying to understand what had happened, they spotted a lone TIE/ln space superiority starfighter, which appeared to be heading towards a small moon. While they moved towards the moon, chasing the fighter, Kenobi realized that it was not really a moon; it was an enormous space station. Moments later, they were pulled into a hangar bay by its powerful tractor beam.

Inside the hangar bay, the ship was searched by two stormtroopers who were killed so that the rebels could steal their armor. Pretending to be stormtroopers, they took Chewbacca out, pretending to have arrested him. They left the ship and took him to the hangar control room, killing all staff. They then proceeded to the cell block, where they tried - and failed - to bluff their way through, being forced to kill all staff. When reinforcements came, they rescued the princess and escaped through a garbage disposal, proceeding to board the Millennium Falcon and escape the Death Star. 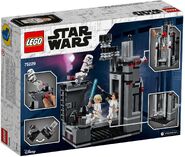 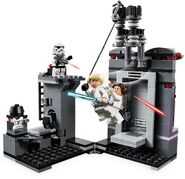