75234 AT-AP Walker is a Star Wars set released in 2019 under the Star Wars Episode III: Revenge of the Sith subtheme.

The All Terrain Attack Pod (AT-AP), or Pod Attack Walker (PAW), was a tripedal walker that evolved from the AT-PT and AT-TE walkers towards the end of the Clone Wars. They were used by the 327th Star Corps, 91st Reconnaissance Corps, 41st Elite Corps, 282nd Regiment, 121st Regiment, 96th Regiment, 76th Regiment, 212th Attack Battalion, among other units in Grand Army of the Republic and Imperial Army.

As the Clone Wars raged on, the Galactic Republic's army commanders recognized a need to build up and diversify their walker armor. One of the new designs that emerged from the Republic's think-tanks was the AT-AP, an artillery walker based off the fore compartment of the AT-TE. Although armored, the AT-AP was too specialized to be used on its own in direct combat. It and other gun batteries of this type would usually be accompanied by heavier equipment, such as AT-TEs, Tridents and HAVw A6 Juggernauts on the battlefield. In the waning days of the Clone Wars, the AT-AP found extensive use in multiple Outer Rim theaters. A great number of these walkers were attached to the 41st Elite Corps in the Battle of Kashyyyk, where they helped defend the city of Kachirho alongside the A6 Juggernaut. They found similar application on planets like Saleucami and Felucia, the former under the command of Stass Allie and the latter with Aayla Secura alongside AT-OTs and ISPs. 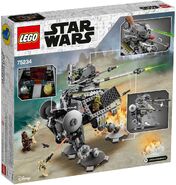 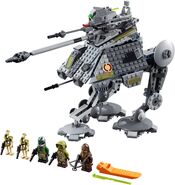 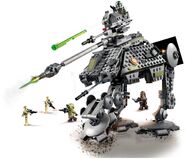