Following the preliminary attacks on Yavin IV, a fleet of 22 X-wing, 8 Y-wing, and 2 R-22 Spearhead starfighters scrambled to assault the station. The Death Star attempted to use its batteries to defend itself, but the defenses were designed primarily to fight off capital ships, not the small and agile Rebel ships. The fighters destroyed several turrets and a rookie pilot known as Rookie One destroyed a giant ion cannon mounted on the Station, in order to set the stage for the main phase of the assault.

The station commander, Grand Moff Tarkin, dismissed the attack as futile and refused to deploy the station's vast TIE squadrons. Tarkin also refused to evacuate when his chief, Moradmin Bast, attempted to warn him that the Rebels may have found a weak spot in the station. But Darth Vader, realizing the material threat, ordered his personal fighter squadron to scramble on his own authority. The TIE fighter squadron attacked the Rebel forces soon after they realized that their laser batteries were failing. An order was passed on, to stop all turbolasers from firing, letting the TIEs do the job, and to avoid the risk of Imperial fighters being shot down by friendly fire. The Rebels engaged in duels with the starfighters, destroying several to clear the way to the trench.

As the rest of the Rebel fighters engaged Vader's forces, three Y-wings from Gold Squadron began their attack run on the trench. They were followed by Vader in his TIE/Advanced, flanked by Backstabber and "Mauler" Mithel in TIE/LNs. Vader shot down Tiree (Gold Two) and Jon Vander (Gold Leader) in the trench, then shot down Davish Krail (Gold Five) as he attempted to escape. Following the failure of Gold Squadron, the Rebel tacticians on Yavin 4 directed Red Leader to keep half of the group out of range, and Red Leader instructed Reds Two, Three and Five (Wedge Antilles, Biggs Darklighter, and Luke Skywalker, respectively) to hold back while he led the second trench run, flanked by Reds Ten and Twelve.

Red Squadron made a second bombing run, with Garven Dreis (Red Leader) making the attack itself, while Red Ten and Red Twelve attempted to hold off Vader and his fighters. While both his companions were shot down, Red Leader succeeded in making the run, but his proton torpedoes exploded on the exhaust port's surface, leaving a near miss and also killing some stormtroopers inside from the force of the explosion. The remaining X-Wings attempted to cover Red Leader on his exit from the trench, but Dreis, who had been hit and damaged while exiting the trench, ordered them to maintain their position and prepare for their run, just before being shot down by Vader.

Skywalker was in the lead, while Darklighter and Antilles maintained a greater distance behind him in order to shield him from the Imperial fighters. The three pilots traversed the trench at full throttle in order to keep the TIEs away. Vader and his wingmen gave chase, and opened up on the X-Wings at long range. One of the wingmen's shots scored a minor hit on Wedge's X-Wing, damaging the engine array, and he was forced to abandon the trench run, unable to keep up with his wingmates. Vader instructed his wingmen to let him go and maintain their pursuit of Biggs and Luke. As they closed the distance, Biggs threw his X-Wing into a weave maneuver, erratically moving around both laterally and vertically, to deny his pursuers a clean shot at either his leader or himself. While this was successful against Vader's wingmen, the Dark Lord of the Sith anticipated his opponent's move through the Force and eventually got a clear shot at Biggs, killing Luke's childhood friend from Tatooine and leaving Luke without any assistance in the trench.

Vader, sensing that the last pilot, Skywalker, was strong in the Force, prepared to kill him (unaware at the time that Skywalker was his own son). However, at the last moment, Han Solo and Chewbacca in the Millennium Falcon surprised Darth Vader and, with a laser blast, destroyed one of his wingmen, Backstabber. In the confusion, the other wingman, Mithel, panicked and collided with Vader's fighter, sending himself crashing into the trench and Vader careening out of control into space. With the Force aiding him, Luke fired his torpedoes, both of which entered the port perfectly. On the Death Star's bridge, Admiral Motti called out that torpedoes were in the main shaft and would hit the reactor. The Death Star exploded just seconds before its main gun would have destroyed Yavin 4. Grand Moff Tarkin and almost the battle station's entire crew were killed. 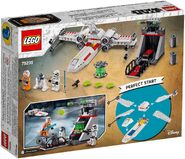 $44.99 +
Released
January 2, 2019 +
ShopDescription
Let your child play out unforgettable LEGO … Let your child play out unforgettable LEGO® Star Wars™ space adventures with the 75235 X-Wing Starfighter Trench Run collectible building toy. This LEGO 4+ set is designed to be fun and easy for youngsters, with folding wings and an opening minifigure cockpit, plus a special Starter Brick base that lets even first-time builders experience the pride of constructing buildings, vehicles and more, all on their own. The included simple guide to build and play will also help your young Rebel warrior understand the purpose of the building steps and grow their imagination and confidence for the perfect start to LEGO brick building in a familiar Star Wars setting. This simple LEGO set also includes a rotating turret for endless action play as well as Luke Skywalker and Stormtrooper minifigures, plus an R2-D2 Star Wars LEGO droid figure.</br></br>*LEGO® 4+ sets are specially designed to be fun and easy for youngsters and help to grow their confidence with simple building steps for the perfect start to LEGO brick building.</br>*Includes 2 LEGO® Star Wars™ minifigures: Luke Skywalker in his X-wing pilot suit and a Stormtrooper, plus an R2-D2 LEGO figure.</br>*This set features an easy-to-build X-wing Starfighter and a turret with firing disc shooters.</br>*X-wing, as seen in the blockbuster Star Wars™: A New Hope movie, features opening wings and a cockpit to sit Luke in, plus a Starter Brick base to quickly get your child building and playing in an exciting LEGO® Star Wars galaxy far, far away.</br>*Weapons include Luke’s Lightsaber and the Stormtrooper’s blaster.</br>*LEGO® 4+ introduces your child to a wide universe of their movie favorites, TV characters and everyday heroes.</br>*LEGO® 4+ play sets were previously branded as LEGO Juniors and are compatible with all LEGO building toys for creative play.</br>*Makes an ideal gift for preschoolers and youngsters.</br>*Combines with the 75237 TIE Fighter Attack and 75247 Rebel A-Wing Starfighter 4+ sets for loads of fun-filled Star Wars™ adventures in the stars.</br>*X-wing LEGO® Star Wars™ construction toy measures over 3” (9cm) high, 5” (15cm) long and 7” (18cm) wide.) high, 5” (15cm) long and 7” (18cm) wide.
Theme
Star Wars +
Title
X-Wing Starfighter Trench Run +
Txt1
Luke Skywalker +
Txt2
R2-D2 +
Txt3
Imperial Stormtrooper +
Type
Set +
USPrice
$29.99 +
Advertisement